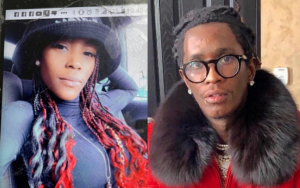 According to several reports, the mother of Young Thug’s children, LaKevia Jackson, was shot and killed at the Metro Fun Center in the SWAT(Southwest Atlanta) section of the city.

LaKevia’s mother Sherina spoke to Atlanta CBS affiliate WDRW and said that LaKevia was at the bowling alley celebrating a friend’s birthday party. An argument started over a bowling ball, which resulted in LaKevia being shot while leaving the establishment.

Sherina Jackson stated, “I didn’t know that was going to be the last time I talked to my baby. I could hear her over the phone crying and screaming then her best friend said she’s not breathing! I lost my baby all over a bowling ball.”

Atlanta PD has not released the identity of the suspect, but they believe they are close to an arrest based on surveillance and testimonies from eyewitnesses.