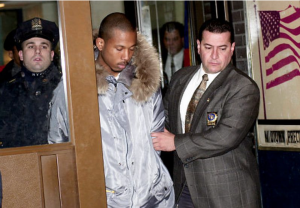 Former Bad Boy bodyguard Gene Deal spoke to The Art Of Dialogue about the shooting in Club NY in 1999 which landed Bay Boy Records signee in prison for a decade and did not pull any punches when saying Diddy snitched on Shyne to save himself.

Deal insinuated that Diddy separated himself from Shyne, whose name is Jamal Barrow, while others made statements against the Biggie soundalike, forcing Shyne into a solitary corner. “They came to Shyne, and they asked Shyne for 20 racks ’cause they had somebody that was gonna make sure all of them got off ’cause they was not going to agree to none of them charges, and they was on the jury stand,” Deal says. “Shyne may not admit to it, but he knows that to be true. So now, the reason they got off was people was coming to Bad Boy security and said that they were there.”

Deal spoke about the never-before-mentioned snitches on Diddy’s side who were going to assist in throwing Shyne under the bus, saying, “He was like, ‘You supposed to be my brother, and you got people testifying against me?’ Those people were testifying, they were brought to Puff first, saying what they saw against Shyne, what they saw Shyne do. The D.A. didn’t even know those people existed,” said Deal.

The post [WATCH] Diddy’s Former Bodyguard Accuses Him Of Snitching In Shyne’s Case In 1999 Club NY Shooting appeared first on The Source.