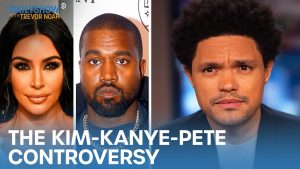 Kanye West won’t be performing at the GRAMMYs despite being nominated five times. Reported reasons include his social media antics, some of which target the show’s host and comedian Trevor Noah.

Hearing about the cancellation, Noah hit Twitter and delivered a statement: “I said counsel Kanye not cancel Kanye.”

Ahead of the cancellation, Noah spoke on The Daily Show about YE’s recent actions toward his ex-wife Kim Kardashian. “Over time, Kanye has become more and more belligerent in how he tries to get Kim back,” Noah said. Later in the segment, Noah added, “There’s an element of a woman saying to her ex, ‘Hey, please leave me alone.’”

Following Noah’s segment, Kanye called the host a “koon,” leading to an Instagram suspension and the subsequent cancellation of his GRAMMY performance.

Kanye West has yet to speak on the cancellation, but The Game has.

MP3: Redveil – Working On It

MP3: Redveil – Working On It