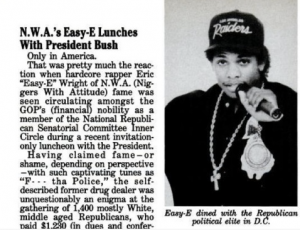 31 years ago, Eazy muthaf**kin’ E made his debut on the White House lawn.

While other rappers of the time were totally against President George Bush and his staunch law and order policies, Eazy-E, along with his manager Jerry Heller, spent $1250 a plate to attend the Republicans Inner Circle dinner.

This private, members-only dinner may have cost Eazy a whopping $2500 for two plates, but that type of publicity couldn’t be bought. Speculation has it that Eazy and Jerry’s attendance at the White House during the Bush administration kept the FBI off of N.W.A’s backs after the controversy over their “Fuck The Police” single.

Soulja Boy Issues Warning to Pete Davidson Over YE: “Stop Playing Before We Come and Mush You”

Soulja Boy Issues Warning to Pete Davidson Over YE: “Stop Playing Before We Come and Mush You”