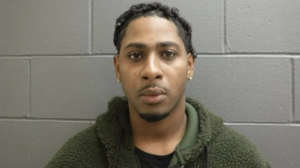 At the beginning of the year, Shundale Barnett and Justin Johnson were arrested together in Indiana for the murder of Young Dolph, but shortly after, authorities in Indiana released Barnett, who was charged with being an accessory to helping Johnson flee Memphis. Now, the Shelby County Sheriff’s Office is searching for Barnett and he cannot be located.

Clay County Sheriff Paul Harden said in a statement, “On Jan. 11, Mr. Shundale Barnett was brought to the Clay County Jail by the Indiana State Police from an arrest on I-70. He was booked in the Clay County Jail on an outstanding warrant from Shelby County, Tennessee. We held them (Barnett), contacted Shelby County, and held him on their warrant and we were contacted on Jan. 21 and they told us that they were no longer wanting to come up and pick up Mr. Barnett and that we were to release him at that time.”

Cornelius Smith the first person to be charged in Young Dolph’s death, was charged with auto theft in connection to the Mercedes used as the getaway car in the murder.