The Game After YE is Removed from GRAMMY Lineup: “They Only Want to Steal the Culture” 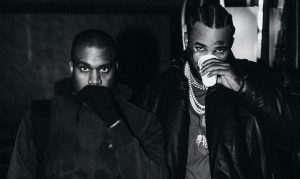 In case you missed it, Kanye West was booted from the GRAMMY performance lineup. Following the breaking news, The Game stood up for his “Eazy” collaborator and issued a statement on Instagram.

“Time & time again they show us that they only want to steal the culture, not allow you to ever be their equals,” Game said. “In a more than obvious move for reasons of minuscule actions…. The Grammys have at the last minute decided to pull @kanyewest from performing on the show as if we didn’t know it was coming.”

According to reports, YE was pulled for his erratic behavior online, which included disses towards Pete Davidson and Trevor Noah, the GRAMMYs host, who he called a “koon.”

The Game acknowledged Noah’s hosting and cited that may be a reason:

“Could be because @trevornoah is hosting and there was a conversation held amongst his team & the academy that led to the decision. Or because Ye’s account was suspended just days ago for reasons unknown; especially in a world where all the negativities of the world can be found on the same app with no repercussions or suspensions. We’ll just say it’s all of the above & a continuous disrespect for us & all that we have brought to the table in entertainment, media & sports over the last 100 years especially.”

You can see The Game’s full statement below.

The post The Game After YE is Removed from GRAMMY Lineup: “They Only Want to Steal the Culture” appeared first on The Source.