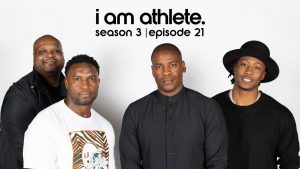 Two of the most common reasons behind athletes going broke after their professional career: bad investments and money management. On last month’s “I Am Athlete” podcast, guest and retired NFL linebacker D.J. Williams revealed his former financial advisor invested $1.2 million dollars in various bad investments early in his career that included an investment of $300,000 dollars into the music career of former Bad Boy Records artist, Sara Stokes.

“Remember when Puffy Daddy had ‘Making The Band’? Ya’ll remember Sara Stokes? The one  … the light-skin girl, ” Williams begins to explain the investment at the podcast’s 22:06 minute mark of season 3 episode 21. “Puffy Daddy had ‘Making The Band,’ there was a young lady on there named Sara Stokes. She was a singer. She was like young, like I don’t want to throw her age out there but she had like three four five kids. All I knew was I invested $300,000 dollars into her music career.”

Williams would claim the investment was in result of leaving his finances to a power of attorney given to his financial advisor while he focused on playing professional football.

“What I’m saying was because of the amount of time and energy that I put into football,” he continued. “I’m going into these meetings and I’m sitting across from this man and I’m taking his word. And I’m just … Okay, yeah, that sounds good, that sounds good. What I’m saying is is if you already a million, relax, chill. Stop trying to rush to become a billionaire.”

Drafted in 2014 – 17th overall by the Denver Broncos – D.J. Williams received a $2.4 million dollar signing bonus his rookie year after signing a five-year deal valued at $9 million dollars – according to Spotrac.com. The linebacker would play ten seasons with the Broncos, earning over $35 million dollars. Williams played 12 seasons in the NFL before retiring in 2014 with the Chicago Bears.

It was never revealed throughout the interview if Williams was ever reimbursed for his investment. Stokes was signed to Bad Boy Records from 2002 to 2005.

Sara Stokes, 44, is a Detroit, Michigan recording artist, actress, journalist, best known as the singer in the former Bad Boy Record’s group Da Band. Formed in 2002, Da Band released their gold-selling debut album, Too Hot For TV, in 2003, which spawned hit songs “Bad Boy This, Bad Boy That” and “Tonight.” The six-member group had their journey documented on reality television for three seasons aired on MTV 2.

After Da Band, Stokes, mother of three, released multiple solo singles, independently,  throughout the years, like 2015’s “Sneak Peek” featuring Babs Bunny and 2016’s “Fragile Heart.” Outside music, Stokes embarked in an acting career, known for roles in recent films, The Many (2019), The Enemy (2019) and Facade: Chapter 4.

News of the investment comes during a slew of other trending stories going viral right now surrounding Sean “Love” Combs with old clips from the popular 2000s MTV rap competition series Making the Band, which Combs executive produced, and several former music mogul’s artists releasing public criticism about the harsh treatment they endured their time on the reality show and under Diddy’s Bad Boy Records.

Freddy P, who was Diddy’s first choice when putting together former group Da Band, took to Instagram last week to criticize his former mentor and revealed him responsible for the Florida native’s multiple suicide attempts, all stemming from recounts of his time under Diddy’s tutelage.

“This year alone I’ve contemplated suicide three or four times,” he says in the video. “I done pictured my brother walking in and finding me dead. I cried a few times thinking about leaving my son because I just get tired of life. But no matter what you gotta do you just gotta keep at it … there’s n-ggas that wanna see you fall.”

He added: “Like this n-gga Puffy is the main muthafuckin’ reason why I hate fucking life, dawg. People don’t even understand. Like, I don’t even give a fuck. I’ve never been to a point where I thought of suicide my whole life, never. I mean, I’m a gangsta. I don’t even know how I started thinking like that. I done had it all and I fell to the bottom. How do you come back from that when you battling a giant? It ain’t got nothing to do with your skill no more ’cause your skill is 90 percent better than any n-gga that’s out there right now and the world knows it. But it ain’t your skills … the world is built on relationships.”

Freedy’s rant sparked reactions from fellow Da Band member Babs Bunny, who simply responded in an interview that the group just signed a “shitty contracts,” and Willie Taylor, formerly of the Making of the Band-created R&B group Day 26, who chimed in with the belief that the show and group was set up to “fail.”

The 52-year-old billionaire with ownership in Ciroc and his own television network, Revolt, addressed the claims of his former proteges last Monday via social media. On an Instagram Story, he writes, “STOP ALL YOUR CRYING, BITCHING & MOANING. HUSTLE HARDER OR GET THE FUCK OUT OF OUR WAY. – LOVE.”

All parties involved have not issued a statement on Williams’s revelation at press time.

Watch the latest episode of the I Am Athlete podcast below.