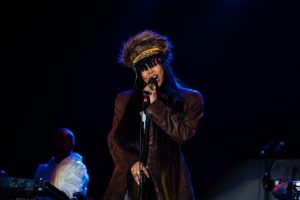 For its successful return, the Smokin Grooves event brought all of the vibes to Los Angeles Historic Park in Los Angeles, California on Saturday. With headlining performances by Erykah Badu, Nas, The Roots, Jhene Aiko, and Miguel, as well as fantastic sets from The Internet, Flying Lotus, Kamasi Washington, Thundercat, Smino, and others, the day had one of the most eclectic and well-curated lineups for a festival.

One of Erykah Badu’s rare festival appearances was her headlining act. Her fantastic band backed her up on some of her best singles, including “Hello,” “On and On,” “Window Seat,” and more. Her silhouette was defined in sparkles on the stage LED screens, which added to the show’s spectacular visual effects.

Nas delivered a hit-filled set that included “Made You Look,” “NY State of Mind,” and a slew of other songs from his critically praised albums King’s Disease and King’s Disease 2. Nas returned with hit after hit after hit during his frenetic performance as light sprinkling fell on the crowd.

The Roots wowed fans with their dramatic stage presence and performance, which included songs like “The Next Movement,” “Here I Come,” and others. Jhene Aiko returned to the stage for the first time in three years, performing “Tryna Smoke,” “The Worst,” and other songs with harmonized bass lines. Miguel wowed the adoring crowd with his distinctive motions and enigmatic voice, performing favorites like “Sky Walker,” “Sure Thing,” “Vixen,” and many more.

You can see images from the event below.

The post Recap: Erykah Badu, Nas, and The Roots Perform at Smokin Grooves Fest 2022 appeared first on The Source.