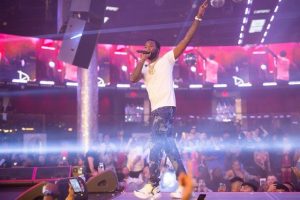 “We are proud to produce residencies at the forefront of music so it’s with great excitement that we welcome back Meek Mill,” said Dustin Drai, Vice President of Entertainment, Drai’s Management Group. “As one of the industry’s best and most powerful live performers, we look forward to welcoming him back to the Drai’s LIVE stage and continuing our great partnership.”

Expensive Pain, Mill’s most recent album, is a reflection of his life’s difficulties and accomplishments through bangers and emotional compositions. Championships, which opened at No. 1 on Billboard’s Top 200 Albums and earned him a GRAMMY nomination for Best Rap Album in 2020, is his second chart-topper. Mill’s portfolio includes audience favorites such as “Dreams and Nightmares,” “R.I.C.O.” (feat. Drake), “House Party,” “Respect The Game,” and “100 Summers,” as well as popular new singles such as “Hot” and “Sharing Locations.”

The sweeping 35,000-square-foot beach club, which is 11 stories high and surrounded by spectacular views of the Las Vegas Strip, is known for sensational pool parties, lavish cabanas and bungalows, and live entertainment. You can get tickets to Meek’s tenure here.