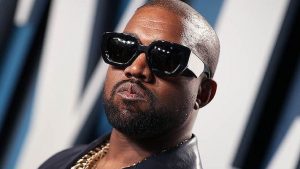 Kanye West has already proven his versatility as an artist in the industry. With eleven studio albums, one compilation album, two live albums, two collaborative albums, four mixtapes, and his documentary, there is no doubt that Kanye was destined for stardom. While the 44-year-old rapper’s future is bright, recent events could have possibly been dimming the rapper’s light in a social media back and forth with Pete Davidson.

Kanye West’s most recent music video for his song “Eazy,” an animated Ye beat claymation version of Pete Davidson and buried the cartoon alive. Fans found the move to be highly disturbing as the two have been exchanging blows on the internet over the past few months. As if Pete Davidson wasn’t enough, Kanye Would then exchange words with DL Hughley, Kid Cudi, and Trevor Noah.

Kanye was blocked on Instagram for 24 hours following his antics with Skete and dumped from the GRAMMYs soon after. TMZ caught up with Erica Campbell, 1/2 of the singers in legendary gospel group Mary Mary where she says she feels the rapper should exhibit his faith all year round, not just on the infamous Sunday Service.

“I just think if you’re trying to be like God on Sunday, then you should be like him on Monday, Tuesday, Wednesday, Thursday, Friday [and Saturday] as well,” Campbell stated.

“Does that mean perfection? Not at all,” she continued. “It means your choices should be governed by what you believe. If you believe in faith and being kind and being gracious and understanding and being patient, then you have to be that way all week long…but you know, we all go through things. We don’t always get it right so prayers up for Kanye.”

Erica Campbell then acknowledged that the rapper is currently going through a divorce, and Davidson is now dating West’s ex-wife Kim Kardashian.

“When you love somebody it doesn’t go away because you get divorced. That’s why they be so mad after, cause they still in love,” Campbell added. “My mother and father married each other three times. Cause they couldn’t…they just loved each other. Sometimes it’s that way, you try and it doesn’t work. That doesn’t mean the love goes away.”

Watch the video of Campbell’s TMZ stop below.

The post Mary Mary Star Erica Campbell Says Kanye West Should Try to Be Like God All Week appeared first on The Source.

MP3: Quelle Chris Ft. MoRuf & Pink Siifu – The Sky Is Blue Because The Sunset Is Red

MP3: Quelle Chris Ft. MoRuf & Pink Siifu – The Sky Is Blue Because The Sunset Is Red