Man Steals U-Haul Containing 1,110 Pairs of Yeezys Worth Over $250K 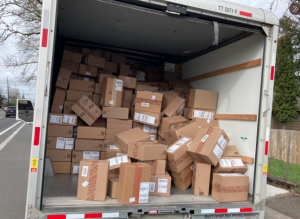 According to a police report on Twitter from the Portland Police Department, a man was arrested earlier this week for stealing a U-Haul that contained over 1,100 pairs of adidas Yeezy sneakers worth over $250,000.

26-year-old Rupert Crosse was arrested for the crime and charged with aggravated theft and possession of a stolen vehicle.

The Portland Police Bureau’s North Precinct tweeted a photo of the retrieved U-Haul saying, “Last night, a Uhaul containing 1100 pairs of new Adidas “Yeezy” shoes was stolen. Dayshift officers located the uhaul, arrested 26 YO Rupert Crosse, and recovered the shoes which are estimated to be worth over $250,000. Great work North Dayshift! Case 22-74652.”

The post Man Steals U-Haul Containing 1,110 Pairs of Yeezys Worth Over $250K appeared first on The Source.