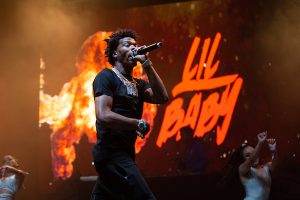 Lil Baby said it’s his turn again. Well, he didn’t say that verbatim, but it is his turn again as the Atlanta rapper said his album is in its finishing stages. Along with giving an update on his album stages, Lil Baby also declared to drop new music.

Earlier this year, the My Turn posted a picture of him in the studio with the caption stating, “I’m coming.” Well, he’s not here with the music yet, but he’s definitely on the way.

Since entering the music game, Lil Baby has held a major influence in Hip-Hop. Lil Baby’s last two albums, My Turn and The Voice of the Heroes, his joint project with Lil Durk, both respectively reached No.1 on the Billboard 200 album charts.

The 4 Pockets Full Boss has been killing the features. And although he hasn’t been drooping music, he has been in the airwaves. He recently collaborated with Nicki Minaj on “Do We Have A Problem.” Then they spun the block again and collaborated on “Bussin.”

Before that,  he laid a verse on Gunna DS4Ever album, dropped a verse on Nardo Wicks, “Me or Summ,” Meek Mill’s “Sharing Location,” and Drake’s “Girls and Girls.”

The post Lil Baby Promises New Music and Said His Album Is Almost Done appeared first on The Source.