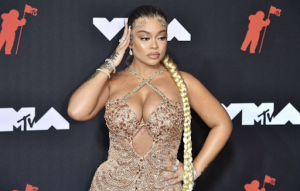 From winning Jermaine Dupri’s The Rap Game to selling out her first tour, Latto has been climbing the ladder in the music industry, releasing singles such as Big Energy, Wheelie, and Queen of Da Souf. The 23-year-old rapper will release her highly anticipated debut studio album on March 25th.

The 13 track album will feature appearances from Lil Durk, Lil Wayne, Childish Gambino, Nardo Wick, Kodak Black, and more. Aside from anticipating her album, Latto also has fans waiting on the remix to her single “Big Energy,” featuring an artist who has yet to be revealed. The remix to the single is expected to release on March 28th.

While people praise the Clayco rapper for her accomplishments, trolls on social media are also trying to come at Latto, stating that her venue for her tour with guest performers Saucy Santana and Asianae was too small.

“That lil ass stage,” someone commented on a video of Latto performing at the tour.

In her defense, prominent HIp-Hop manager TP pointed out that Playboi Carti and others were on the same stage in the early days of their career. “Y’all folks gotta stop hating on Latto and female rappers. Playboi Carti, Young Nudy and Gunna did that same exact stage in 2017 and nobody was calling it little. Stop the bullshit,” the fan wrote.

Latto would respond to another fan stating, “Y’all be impressed by festival stages with tens of thousands of ppl that came to see 100 artists. These 1-3k ppl coming to see ME. Most new artists scared to do it cause they can’t sell hard tickets cause the internet hype don’t transfer over in real life.”

Regardless of the size of the stage, Latto has been proving herself to be a talented emcee in the rap game. We cant wait to see the success of her debut album.

The post Latto Claps Back at Fans Who Attempted to Shame Her Tour Venues appeared first on The Source.