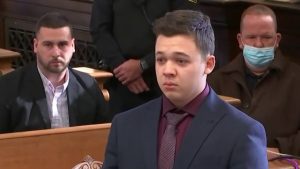 Kyle Rittenhouse, the 19-year-old who killed two people and injured one at a Black Lives Matter rally in 2020, recently announced that he plans to sue multiple “politicians, celebrities, [and] athletes” over calling him a “murderer.”

According to The Guardian, Rittenhouse told Fox News commentator Tucker Carlson that he is planning on launching the “Media Accountability Project,” an initiative to hold members of the press accountable for the “lies” he claims they spread about him.

“Me and my team have decided to launch the Media Accountability Project,” Rittenhouse said on the show, “as a tool to help fundraise and hold the media accountable for the lies they say and deal with them in court.”

When asked who he would be coming after, Rittenhouse said that he and his team would be taking legal action against  “a few politicians, celebrities, athletes,” and named Whoopi Goldberg specifically. “Right now, we’re looking at quite a few politicians, celebrities, athletes. Whoopi Goldberg is on the list,” he said. “She called me a murderer after I was acquitted by a jury of my peers.”

After Rittenhouse was acquitted on his murder charges in November of last year, Goldberg maintained her stance on The View. “Even all the excuses in the world does not change the fact that three people got shot,” Goldberg said. “Two people were murdered. To me, it’s murder. I’m sorry.”

Not only does Rittenhouse want to go after those who called him a “murderer,” but he wants to go after people that have called him a white supremacist as well. “We are going to hold everybody who’s lied about me accountable, such as everybody who’s lied, called me a white supremacist,” he said. “They’re all going to be held accountable, and we’re going to handle them in a courtroom.”

The post Kyle Rittenhouse Plans to Sue Whoopi Goldberg and Other Media Figures and Platforms Over “Lies” appeared first on The Source.