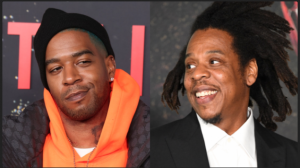 According to a post from his official Twitter page, Kid Cudi revealed he’ll be working on his directorial debut with Teddy, a comedy slated for Netflix later this year.

Based on the Cleveland native’s 2009 hit, Pursuit Of Happiness”, Teddy will not only be directed by Cudi, but the script was also wittten by Cudder, but will also star the “Day And Nite” rapper. The Netflix feature film also boasts Shawn “Jay-Z” Carter and LeBron James as executive producers of the film.

Writing a message to his fans via social media, Cudi said, “I added a lot of my own personal struggles and experiences in it, so this film is very close to my heart,” he wrote. “I know that, deep down, this movie will help people the same ways music has… It’s trippy, it’s fun, it’s sad, it’s life.”

The post Kid Cudi Connects With Jay-Z For Directorial Debut Based On “Pursuit Of Happiness” appeared first on The Source.