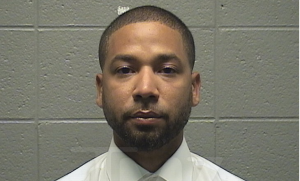 According to several confirmed reports, disgraced actor Jussie Smollett was placed in the psych ward in the Cook County Jail after receiving his 150-day jail sentence, but his brother says that despite his classification, Jussie is not having any mental health issues while incarcerated.

Jocqui Smollett, the brother of Empire actor Jussie Smollett took to IG over the weekend, saying, “So Jussie is currently in a psych ward at the Cook County Jail. What’s very concerning is that there was a note attached to his paperwork today saying that he’s at risk of self-harm.”

Jocqui continued, “I want to make it clear that he is in no way, shape, or form at risk of self-harm. He wants to let folks know that he is very stable, he is very strong, he is very healthy and ready to take on the challenge that… has been put up against him.”

Sources in law enforcement say that Smollett was placed in the psych ward because it is another housing unit used for high profile inmates.

Smollett was sentenced to five months behind bars for faking a racial and homophobic attack in Chicago back in January 2019.

Nigerian Lady shares photos from her simple wedding, advices against expensive wedding to impress others

Nigerian Lady shares photos from her simple wedding, advices against expensive wedding to impress others