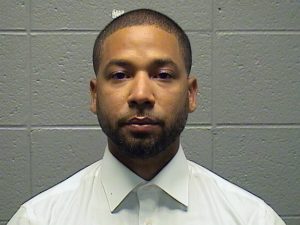 Jussie Smollett is no longer in the psychiatric ward of Cook County Jail. According to TMZ, a Cook County Sheriff’s office representative states, Smollett was moved because his cell was needed for another person.

“Mr. Smollett’s housing unit was changed Monday to a different cell within Division 8,” the rep said. “He was moved from that cell because Cermak Health Services needed his cell for another detained person. This was a decision made by the medical professionals. Mr. Smollett was never restrained to a bed or anything else in the cell. The bed was never equipped with restraints.”

The rep added, “Mr. Smollett remains housed in his own cell with officers stationed at the open door to his cell to ensure that he is under direct observation at all times. As with all detained persons, Mr. Smollett is entitled to have substantial time out of his cell in the common areas on the tier where he is housed.”

The Sheriff’s representative statement counters one made by his brother Jocqui Smollett, who visibly is out front of the “Free Jussie” movement. Jocqui called the move a big push forward, caused by the public backlash. “Cook County doesn’t really move until they get bad publicity … keep continuing to call Cook County Jail checking in on him and keep saying that you believe he should be free.”

Jussie Smollett‘s legal team is working hard to get the actor out of Cook County Jail. According to TMZ, Smollett’s lawyers have petitioned by emergency motion to release him from the Chicago jail.

Smollett’s legal team states his family has received harassing messages and phone calls targeting Smollett in the legal documents. His family supplied a video of a phone playing a voicemail riddled with racist and homophobic slurs. The threats are feared to turn into actual violence against the actor inside Cook County.

In addition, lawyers state Smollett is at higher risk for contracting COVID-19 due to a compromised immune system. Jussie is also believed to be in solitary confinement, which hurts his mental health.

Smollett was sentenced to 150 days in Cook County, in addition to supervised probation and restitution.