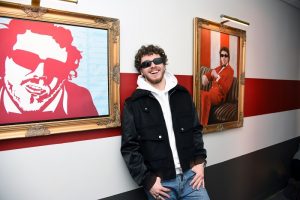 Jack Harlow is taking his partnership with KFC to a new level by introducing Jack Harlow’s Kentucky Fried Favorites. Fans can now find those favorites on the KFC app and KFC.com.

The Spicy KFC Chicken Sandwich, Secret Recipe Fries, Extra Crispy Tenders, a side of Mac & Cheese, and, of course, KFC’s famous biscuits are all included in Jack’s Kentucky Fried Favorites.

Jack recently visited KFC’s headquarters in Louisville, where he met with Chris Scott, the company’s Head Chef, for a behind-the-scenes look – and taste – at how KFC creates its “finger lickin’ excellent” fried chicken and fan-favorite sides. During his visit, Jack was able to get the full KFC experience, from breading and frying chicken with Chef Chris to posing with his portrait in the iconic red and white halls.

“Partnering up with KFC feels like poetic justice. I’ve begun traveling the world and no matter how far I go, KFC is one of the first things people want to bring up when they find out where I’m from,” says GRAMMY -nominated recording artist, Jack Harlow. “I’m excited to align myself with something that started in Kentucky, but resonates all over the globe. I grew up going to the restaurant with my family, here are a few of the menu items I’ve been enjoying since I was a child.”

“It goes without saying that our classics will never go out of style, but as Jack’s favorites, a few of them are getting celebrity status,” said KFC U.S. CMO Nick Chavez. “We are excited to make Jack’s favorites available now on the KFC app, and can’t wait to share what’s next with Jack Harlow and
KFC. Stay tuned. You won’t want to miss it.”

The post Jack Harlow Reveals His Kentucky Fried Favorites as Part of KFC Partnership appeared first on The Source.