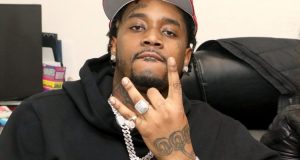 Fivio Foreign has been racking up on many accolades in his career in the industry. Despite working with hip-hop greats such as Kanye West, Alicia Keys, Playboi Carti, and more, the New York drill rapper has still yet to release his debut studio album.

The album, titled B.I.B.L.E. (Basic Instructions Before Leaving Earth), was initially set to release on March 25th, but the “Wetty” rapper announced this Sunday that he would be pushing the release date back until April, after believing that is it not quite ready yet.

“My album gon’ be pushed back,” he stated on Instagram. “I pushed it back one more time. This is the last time though, for sure. It was March 25, now it’s April 8. It ain’t really a reason or anything, I just wanted to make that sh*t perfect. I want it to be the perfect album. That sh*t is going to be viral. Stay tuned, that sh*t gon’ be viral. April 8.”

Previously, Fivio revealed that Kanye West would be producing his entire album, leading fans to believe that this pushback could be well worth the wait. Check out the snippet of his single featuring Quavo below!