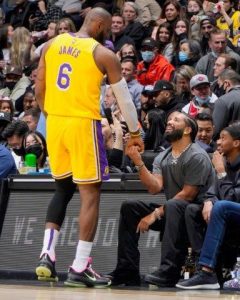 LeBron James made a visit to Toronto, aka LeBronto due to owning the Raptors every time he visits with magical performances, and helped the Lakers squeak out a win over the home team. Courtside at the game was Drake, who had a bottle of Lobos 1707 Extra Añejo positioned at his courtside seat.

The 6ix God was pulled a page out of King James’ handbook as last year Bron did the same. LeBron, an early investor in the tequila brand, brought a bottle courtside to a game, sparking the “Bring Your Own” Tequila movement.

As for the game, Russell Westbrook hit a game-tying 3 at the end of regulation, which also got a reaction out of Drake. Full highlights are below.

The post Drake Greets LeBron James Courtside with a Bottle of Lobos 1707 appeared first on The Source.