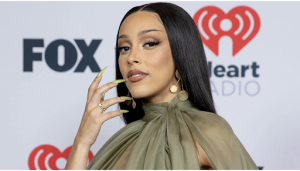 Doja Cat seems to be quitting the business due to frustration from Paraguay fans who called her out after they stood outside in the rain to meet the star, only for the rapper not to appear, after her show was canceled because of a storm. In response, Doja issued a Tweet that read “This Shit ain’t for me so I’m out. Y’all take care.”

According to screenshots that have since been deleted, Doja went on a rant with a series of tweets, stating that “There was a storm in Paraguay, the show got canceled. When I left the next morning, there wasn’t one person outside the hotel waiting for me.  The rapper also replied to fans who commented stating “It’s gone and I don’t give a f**k anymore I f**king  quit I cant wait to f**kn disappear and I don’t need you to believe in me anymore.  Everything is dead to me, music is dead and I’m a fuckin fool for ever thinking I was made for this this is a f**king nightmare unfollow me. Let that sink in.  I regret spending all the time I did getting ready that day for the show I’ve been busting my a** every day to put on for you but god bless.”    She also apologized for not putting on a good enough show in Brazil before changing her Twitter name to “I quit”

We hope Doja finds the strength to move forward and continue with music. Hit us up in the comments and let us know what you think.

The post Doja Cat Claims She Quitting Music “This S**t Ain’t For Me So I’m Out” appeared first on The Source.