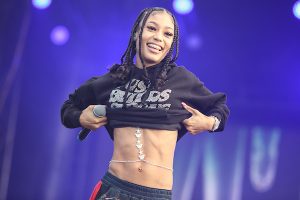 It’s safe to say bottles in the club are on Coi Leray this weekend. The 24-year-old emcee recently announced her collaboration with Nicki Minaj, expected to release this Friday, March 18th, titled “Blick Blick.”

Just last month, Coi Leray made headlines after her father Benzino seemed to have spilled the beans on the upcoming collab during a clubhouse chitchat.

“She got the song with Nicki Minaj that’s gonna be coming out that’s gonna be crazy,” he revealed. The news immediately circulated the internet as people were excited for Coi Leray, who is still trying to beat the odds in the industry. Nicki Minaj denied any upcoming collaborations with anyone, and Leray told her father to let her handle her career.

“He gotta play the back gracefully because it’s my turn now,” Leray stated on Instagram. “You know? It’s my turn, daddy. I’ma need you to sit the fuck down, grab some popcorn, enjoy the show and clap for me when it’s time to clap for me.”

It seems as though her father didn’t take away the special moment for Leray after all, as Nicki Minaj admits to fans that she did pull away from her verse from the single. However, she continued to work with Leray because she really respects the New Jersey native as an artist.

“I did pull it,” Nicki responded to a fan. “The label hit me going hard. But rlly I had a private convo w/coi & that’s what changed my mind. Not the label. I just felt bad that she was robbed of telling the world in her own way @ her own time. But that’s water under the bridge now. Good vibes all 2022,” Minaj penned.

While fans were quick to defend Benzino, stating that he was actually telling the truth, Leray stepped on Twitter with a few words of her own following the exciting news. “My dad has to realize that Im my own person. Not only am I [an] artist but ima young black WOMEN FIRST and he has to understand his actions and what he does can possibly affect me overall as a brand. Most important part of it all is, all this is bringing me and him closer,” she wrote.

It’s great to see Coi Leray get her moment. Will you be tuned into “Blick Blick” this Friday?