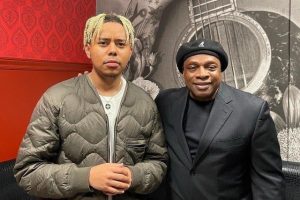 Coach Ken Carter, the great basketball coach who inspired both the sports movie classic Coach Carter and the title of Cordae’s latest single “C Carter,” arrived at his Sacramento gig on Saturday night to meet the latest The Source cover star.

Carter’s staff planned the pop-up meeting with Cordae’s management after learning about the song from one of his boarding school students.

“I’m very proud of Cordae; he’s a pleasant young man, talented artist, AND– he plays basketball.” Coach Carter said. “I’ll have to see how well he plays one of these days soon.”

After his decision to lock his undefeated basketball team out of the Richmond High School gym in 1999 made national headlines, Coach Ken Carter became the inspiration for the 2005 film Coach Carter. The community was upset at first, but his calm demeanor and resolve motivated his athletes to excel intellectually as well as athletically. The film is presently available to watch on Netflix.

MP3: Polyester the Saint – Float Away

MP3: Polyester the Saint – Float Away