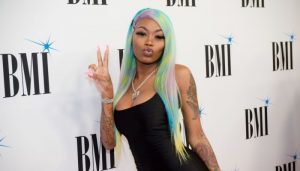 Asian Doll has been consistent in the music industry since her first release of Da Rise of Barbie Doll Gang Empire in 2015. As the Dallas Texas rapper continues to make a name for herself, the 25-year-old artist is most notable for her singles such as First Off, Pull Up featuring the late King Von, and NunnadetSh*t.

Aside from her growth as an artist in the industry, fans of the rapper have also had to watch Asian grow as a person over the years. Following a few physical altercations and social media back and forths, it seems as though Asian Doll is putting the aggression in her pen on a new drill beat.

The rapper pens over a sample to Justin Beiber’s “Baby,” released in 2010 off of his My World 2.0 album. Asian would pen on her social media that she may release the single Friday after posting a snippet of the music visual. “Might Drop This Today For The Fans,” she penned before referring to herself as the “Queen of Drill.”

The comments sparked mixed reviews online on whether or not Asian Doll could qualify to the Queen of Drill. Check out some of the discussions below. What do you think?

MP3: Ravyn Lenae – Light Me Up