Afro Nation and Billboard Partner for New US Afrobeats Chart 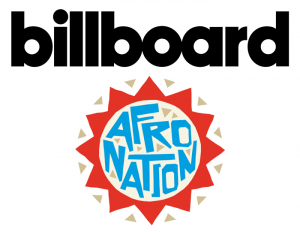 Billboard has launched the first-ever Afrobeats music chart in the United States, collaborating with Afro Nation, a music festival and global Afrobeats brand. The Billboard U.S. Afrobeats Songs chart, which has 50 positions, ranks the country’s most popular Afrobeat songs using a weighted formula that includes official-only streams on subscription and ad-supported tiers of leading audio and video music services, as well as download sales from top music retailers. On March 29th, the Billboard U.S. Afrobeats Songs chart will be available on billboard.com.

“The last decade has seen Afrobeats explode into a worldwide phenomenon, influencing culture and fashion across the globe and I am humbled to have made a contribution to growing the genre alongside many talented, passionate people,” said Afro Nation founder, Co-Head of UTA London and founder of Event Horizon Obi Asika. “There is still so much more potential within the scene and the community that has grown around it and I believe it is vital that with Billboard we now have a US chart that reflects this growth and provides a platform for emerging artists from every continent to showcase their talent to new audiences.”

“Billboard is excited to collaborate with Afro Nation on the launch of the Billboard U.S. Afrobeats Songs chart,” said Billboard’s SVP of Charts and Development, Silvio Pietroluongo. “As with much of the world, Afrobeats has grown tremendously as a genre in America and we are proud to showcase the top songs and artists with this new weekly ranking.”

Afro Nation is one of several significant drivers to the sound’s development in the United States, with singers like Wizkid, Burna Boy, and Davido set to perform at their festival in Puerto Rico in 2022. This latest move follows Afro Nation’s relationship with the Official Charts Company in the UK, which released the Top 20 Afrobeats Chart in July 2020. Through the groundbreaking Billboard U.S. Afrobeats Songs chart, they are extending their influence to Billboard.

The post Afro Nation and Billboard Partner for New US Afrobeats Chart appeared first on The Source.

MP3: Polyester the Saint Ft. Banco & Le$ – Out In Houston